From Journalist to Advocate to Academic: the new Frank Karel Chair in Public Interest Communications

Jack: Congratulations on your new position as the next Frank Karel Chair in Public Interest Communications here at the University of Florida. We are excited to have you join the team. Frank Karel, a 1961 journalism graduate of our College, endowed the chair in 2009 after a 30-year career as vice president for communications for the Robert Wood Johnson and Rockefeller Foundations, where he pioneered using science-based communication for social change. Ann Searight Christiano served as the inaugural chair and now Angela joins our College in August 2020.

I’d love to start by asking what first got you interested in this emerging field of public interest communications?

Angela: First, thank you so much! I’m really excited to be joining the CJC faculty and working with such distinguished colleagues, as well as meeting and working with the students. I look forward to diving in!

The experiences I’ve had as a public interest communicator are what got me interested in the field. I’ve practiced public interest communications for about two decades, so I’ve always thought a fair amount about how best to communicate messages and reach various audiences in the most effective ways. When I first started, there was very little guidance. George Lakoff wrote “Don’t Think of an Elephant,” and Frank Luntz on the GOP side similarly came out with theories about how to frame messages, and I realized there was a science behind messaging. It was a relief to get some guidance and realize that we don’t have to guess, that we can be smart about messaging.
The progressive community began to do more message testing and polling, and the findings helped steer us all in the right direction. I’ve also gone up against corporate messaging on the issues I worked on at Public Citizen. It made me search for answers as to why corporate messaging is effective at persuading people to act against their own interests. So it’s something I have thought and read a lot about. I realize that without the benefit of science and theory to explain the hows and whys of messaging, communicators in the public interest sphere are flying blind. We need this discipline now more than ever.

Angela: It grew over time. After I went into journalism, I quickly realized the power of the written word to effect change. I wanted to use my reporting skills to effect positive change, and I believe I was able to do so when I was a reporter. After about 10 years, when the cracks began to form in the foundation of the newspaper industry, I decided I wanted to use the communications skills I had developed as a reporter to be an advocate. I came to Washington, D.C., and eventually got a job at Public Citizen as a press officer. I had joined a public interest organization that achieved positive social change, and I was hooked.

Jack: What have been a few of your favorite projects that you have worked on as a public interest communicator?

Angela: My favorite all-time project was helping to make Washington, D.C., smoke free. I have always strongly objected to secondhand smoke, and one day, I went into one D.C. restaurant too many that was filled with cigarette smoke. Florida had just voted overwhelmingly to go smoke free. I thought, why can’t D.C. be smoke free? So in 2003, I co-founded an organization and helped lead the effort. I ran our communications efforts, lobbied and managed volunteers. It was hard work, but we managed to tap into the desire of the majority of city residents to breathe clean air, and we won. We stuck to our core messaging, thought carefully about our target audiences and were relentlessly repetitive in our messaging, and it worked.

Another effort that was rewarding was the work I did at Public Citizen on the Ford-Firestone safety controversy. In 2000, Ford SUVs had defective Firestone tires, which were blowing out, causing the SUVs to roll over and crush those inside. Joan Claybrook, then-president of Public Citizen, had been head of the National Highway Traffic Safety Administration, so auto safety was one of our areas of expertise. We knew that these deaths were unnecessary and could be prevented. We produced a steady stream of press materials, held press conferences and hammered home the fact that SUVs needed to be redesigned so they were less prone to tip over, and had to have reinforced roofs to protect occupants if they did tip over. We were able to get landmark legislation that, among other things, required SUVs to be lower to the ground and have stronger roofs. In addition, the law required all new vehicles to have tire pressure monitors. So when you buy a new car now, it comes with a monitor that tells you when your tires are low on air. We literally saved lives. That was the result of work we did. It was tremendously rewarding.
A third project that comes to mind is the work we did at Public Citizen to push for a constitutional amendment to curb corporate money in politics. On Jan. 21, 2010—the day the U.S. Supreme Court issued its Citizens United decision, which opened the floodgates to corporate money being used to influence elections—we launched a campaign for a constitutional amendment to overturn the court’s decision. For the first few years, it was an uphill battle, but gradually, through our work and the work of a lot of other organizations, we made progress. We partnered with other groups to ensure consistency in messaging and to create a drumbeat of support. To date, 20 states and about 800 localities have supported a constitutional amendment to overturn the court’s decision. We have made tremendous progress as a community in using communications to highlight the corrosive nature of money in politics and mobilize activists to press for reforms.
Jack: Angela, you have a really deep and diverse background working as a practitioner in the field of public interest communications. From your work as Director of Communications at Public Citizen, to co-founding the non-profit Smokefree DC, to working as a reporter with The Palm Beach Post in West Palm Beach, the South Florida Sun Sentinel in Fort Lauderdale and the Chicago Tribune. I am curious how you will be melding the sometimes opposed worlds of practice and academia? In other words, how do you see the world of practice informing the building of a curriculum, and a research program, in public interest communications?
Angela: I don’t see the worlds as opposed. If anything, I think they inform and strengthen each other. The real-world experiences I have had can help illustrate the principles of public interest communications, spark research ideas and generate ways to expand the curriculum. And the academic theory behind public interest communications can help explain why some campaigns work better than others.

Jack: What are you most looking forward to in your upcoming work as the Frank Karel Chair?

Angela: I’m looking forward to all of it! I can’t wait to start working with students and help them discover the joys of public interest communications, as well as introduce them to the rewarding world of social change work. I also greatly look forward to working with my new colleagues in the CJC. It will be a privilege to work alongside such accomplished and distinguished people. They were so open and helpful during the interview process, and everyone has been so warm and welcoming even though I haven’t yet formally started. I look forward to being a member of the Gator community!

Jack: If you had one question to ask your favorite public interest communicator what would you ask them and why?

Angela: I don’t have a single favorite public interest communicator. People I consider excellent public interest communicators also are activists or have engaged in politics. For instance, the powerful communicators who come to mind are Martin Luther King Jr., Greta Thunberg, Emma Gonzalez and David Hogg (from March for Our Lives), Bill McKibbon (he’s such an eloquent writer) and Elizabeth Warren (who was able to boil down complex banking issues into a Wall Street versus Main Street message). I would ask them about the processes they used to formulate the powerful words and phrases they used, and discuss with them the framing of their issues, particularly how to be most effective in countering opposition narratives.

Jack: Thank you again for taking the time to talk to me. Congratulations on the new position, and welcome aboard!

Angela: Thank you! Congrats to you as well!

Researchers studying the use of digital platforms to help Native American people tell their own stories were winners of this year’s Research Prize in Public... 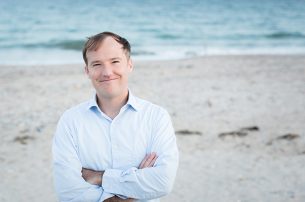 The recent failure of workplace vaccine mandates in the Supreme Court means we have to look for fresh ideas to get the last third of Americans...